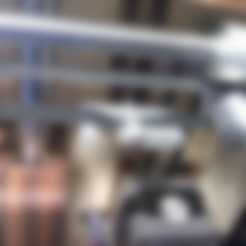 My first version was closed and similar to the belt buckle, but then I realized the difficulty in mounting it to the belt since it would have involved attaching the screw under tension. A quick Dremelling added a gap that I used to then slide the affixed device over the belt (see photos).

1) Print the part out, I used 40% infill with PLA, a strong part is required

2) Thread the screw in initially to help with assembly (and to check that the hole is not too tight or loose). If the part needs adjustment, I've included the OpenSCAD file I used to design it, so you should be able to just tweak the initial constants.

3) Insert the "G" shape over the belt to be tensioned.

4) Close off the belt with the screw, so that it now forms a "6" with the belt captive. For the Ultimaker, depending on the X or Y, you will want to have the block either above or below the belt such that it doesn't impede any of the other mechanical parts.

5) For the Ultimaker, move your X or Y axis to the limit and attach this to the opposite limit, on the other belt. The default OpenSCAD sizing accounts for it having enough room on either side, as long as you place it at the limits.

6) Slip the portion of the belt over the end of the tensioner with the gap. This might be a tight fit, but you should get reasonable tension this way.

7) (Optional) If this doesn't add enough tension, you can tweak the constants in the OpenSCAD script to increase or decrease the height of the center screw. Alternatively, you can thread nuts into the screw, or place spacers to add more tension.

Let me know if this works for you, or if you have any improvements to suggest too!