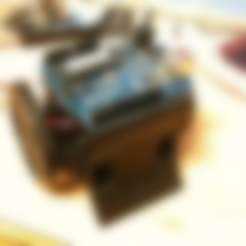 So this is a project I've been thinking about trying out with my robotics club here at Tufts. I played with sumobots a while back in highschool but it turned out to be sort of boring because everyone was using the same kit robot and the same code. The Makerbot is a game changer here. The ability to totally customize a sumobot from the ground up with relatively little effort is awesome. I can't wait to see whole Makerbot sumobot tournaments.

Full disclosure.... this is a relatively difficult print and really pushes the limits of the build size. My makerbot was up to the challenge of the 2.5hr print and resulted in only minor warping but it was definitely a little stressful to watch.

I'm working on another (maybe better, maybe worse) version with multiple parts that slot together which would ensure more uniformity across makerbots.

Print.
Install servos (standard servos... the dimension of mine is roughly 41x20 around the main body).
they were originally intended to be bolted in with 3mm bolts and nuts but hot glue is just as easy and works as well or better.

I still haven't given it a try with the motors because I only have 1 continuous servo on hand but I'll probably hack one of my standard servos and test it tonight.

The front slots should be great for adding IR sensors but I haven't tested the fit yet.