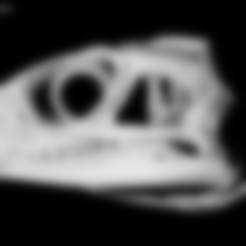 This file is a 3D surface model that has been created using the original scan data for this specimen. It can be downloaded and printed out using a 3D printer/rapid prototyper or it can be rendered in a 3D application. These files are typically very large, so we do not recommend trying to download them without a high-speed internet connection.

Sphenodon species, also known as tuataras, are the sole living representatives of Rhynchocephalia, the sister taxon to Squamata (the clade that includes lizards, snakes, and amphisbaenians; e.g., Ctenosaura pectinata, Gerrhosaurus major, Rhineura sp., and Varanus gouldii). By necessity, Sphenodon is usually used to represent the first outgroup to Squamata in phylogenetic analyses. However, there is a large gap in the fossil record of rhynchocephalians, from the early Cretaceous up to a subfossil, S. diversum. Extant Sphenodon is highly derived, and this limits its utility for polarizing characters in the evolution of squamates.