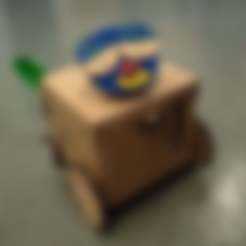 Markerbot is a low-cost robot designed to get young kids programming. The robot features an IR reader which allows kids to program the robot to do whatever they want by simply coloring in the appropriate arrows on a paper strip.

Four IR sensors are positioned along the circumference of the reader and pick up their respective column of tick marks on the strip of paper. The fourth column on the strip is pre-printed with a set of tick marks to indicate when the other sensors should check to see if tick marks are in their own column. The code running on the Arduino splits the strip into 3x3 chunks and extracts the various movement commands to be executed once the "Go!" button is pushed.

This was made for a robotics class. Check out a video of it in action as well as some of the other students' designs...
https://sites.google.com/site/me842010/home/markerbot

Assembly:
- Print the circular reader housing. This may or may not be possible on a Makerbot. I suspect with the right settings and orientation it can be done.
- Bolt the QTR-1A (or -1RC, but I did some time trials and the analog variety looks fastest for Arduino) sensors into position with M3 nuts and bolts.
- 31mm diameter lego wheels were used for the feeding-roller mechanism but anything about that size with a bit of grip should do the trick.
- The body can be made of out anything really. We wanted cheap and fast so we went with cardboard.

Operation:
- Print and cut out one of the paper strips.
- Color in your desired movement commands.
- Insert the strip into the upper side of the circular-reader and crank it through. Don't worry about going at a slow or steady pace. The sensors read so quickly you should be able to just rip it through as fast as you can.
- Hit the Go! button :)