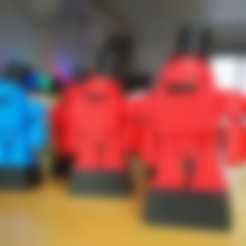 MAKE magazine is excited to have completed nominations for the first annual MAKE Magazine Industry Maker Awards, AKA â€œThe Makeys.â€ Over the course of the past 12 weeks, leading up to our award ceremony on September 16 at Maker Faire New York 2011 (to be webcast live from New York City), MAKE has nominated (and published online profiles of) 12 companies that have shown outstanding support for independent maker/hacker culture. Three companies/products have been nominated in four categories.

This year, the physical trophies will be produced in collaboration with Thingiverse.com (the 3D object sharing site), and manufactured by MakerBot Industries (3D printer manufactures).

Trophy design by Jonathan Monaghan, printed by Matt Griffin, based on an illustration by Kim Dow.

Print out all parts and assemble with superglue.

MAKE unites, inspires, informs, and entertains a growing community of resourceful people who undertake amazing projects in their backyards, basements, and garages. MAKE celebrates your right to tweak, hack, and bend any technology to your will. The MAKE audience continues to be a growing culture and community that believes in bettering ourselves, our environment, our educational system, our entire world. This is much more than an audience, it's a worldwide movement that Make is leading, we call it the Maker Movement.