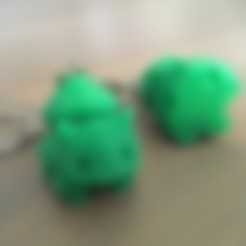 I wanted to print some tiny (25mm tall) versions of Flowalistik's Low poly bulbasaur to make into keyrings, but as the original model had the front legs separate to the base my prints kept failing as sooner or later one of the feet would detach.

To fix this, I modified the file so the base of the model prints out all in one. It solved the problems I was having and have so far had a 100% success rate for tiny prints!

Just print with a decent amount of infill (I've used 75% but I think you can get away with less), then once it's printed drill a small opening in the top and then attach the keyring!