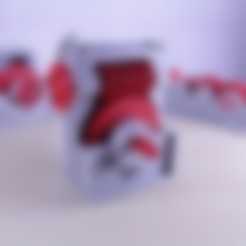 *** PART OF MY INDUSTRIAL GEARBOX COLLECTION ***

This is a fully 3D printable version of an industrial worm gearbox / gear reducer. This cutaway version can be used for training purposes, and has a gear ratio of 1:30

Worm gears
A worm gear consists of a “worm” and a “worm gear”. The worm is a gear with a screw-like shape, when the worm turns 360 degrees the worm gear rotates 1 teeth. Worm gear reducers are typically used in applications that requires high speed reduction when space is limited. Another advantage of the worm gear is that “back driving” is nearly impossible.

*** UPDATE 7-16-2018***
I`ve added a cap that can make the gearbox non-cutaway, see the green parts in the fourth picture. When you want the gearbox to be non-cutaway, you have to print the 2 files named with NON-CUTAWAY.