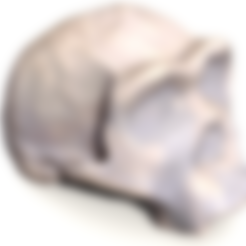 Homo ergaster (meaning "working man") or African Homo erectus is an extinct chronospecies of the genus Homo that lived in eastern and southern Africa during the early Pleistocene, that is, between 1.9 million and 1.4 million years ago. It is one of the earliest hominins, which are those hominids that comprise the original members and species of the human clade after splitting from the line of the chimpanzees. Homo ergaster is variously thought to be ancestral to, or as sharing a common ancestor with, or as being the same species as, Homo erectus. - Wikipedia, https://en.wikipedia.org/wiki/Homo_ergaster

Great model for learning about evolution.