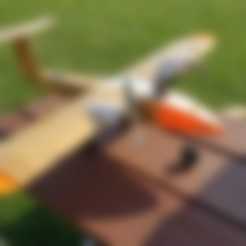 Update: Added a spar coupler part which can be used to make wing extensions, added photos and a video showing 25cm wing extensions added on each side to increase the wing span to 150cm

Space the motor mounts ideally over a rib segment, but make sure it is close to the fuselage, around 1-2 cm gap between the tip of the propeller and the fuselage. This is to decrease the torque in the case of an engine failure.

I used a pair of cessna 182 replacement landing gear from hobbypark on amazon.

I used PLA for all parts, at about 25% infill for all parts, except for the wingMount and sparCouplers/motor mounts which were 40% and 100% respectively. Using PETG or ABS would be a wise choice for the motor mounts if you plan on running your motors hot

In the end use your best judgement, you want it to be light, but not break. Use a higher infill for the wing mount and 100% for motor mount. Winglets can be pretty low, I printed the hoerner winglets at 8% infill with 1 wall layer

Need to print:
4x wingRibHinge (These are the ribs with the attachment point for the aileron)
2x wingRib (6x if you plan on doing wing extension)
4x aileronHinge
1x nose
1x wingMount (this is the center mount where the wing spars mount in)
1x wingToFuselageMount (This is the mount on the fuselage where the wingMount bolts on)
2x MotorMount (This motor mount fits the A2212 1000kv motor with the cross bracket you can find on amazon)
2x-4x TtailBrace (two connecting horz stab to vertical stab, and optional 2 connecting vert stab to fuselage)
2x Spar Couplers (if you plan on making wing extensions)

Best 3D files for 3D printing of planes and aircrafts