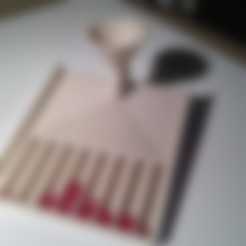 This is a device for performing statistical experiments.

Here's a video of the operation: http://youtu.be/0tp26ChmDxA

Have fun while learning about combinatorics, Pascal's triangle, probability, and the binomial distribution.

Balls are poured into the funnel and allowed to fall and collide into pegs along their journey. Ideally when a ball hits a peg head-on it has a 1/2 chance of going left or right until it finally falls into one of the bins.

N is number of rows of pegs (including the top edge of the bins) and x takes values from 0 to N (say 0 is the leftmost bin and N is the rightmost).

There is a triangle overlay that shows all of these numbers and the number of paths through each intermediate peg. This also happens to be Pascal's triangle. You can lay the overlay right over the pegs but take it off when performing experiments.

This particular Galton board will allow you to adjust N anywhere from 1 to 8 and so you can run experiments with as little as 2 bins or up to 9 bins. This is done by plugging the funnel into the corresponding holes aligned above the triangle of pegs.

Ideally and over the long run the number of balls in each bin will follow the binomial distribution.

This device was printed on a MakerBot Replicator 2 using PLA.

No extra parts or gluing are required.

I scaled the parts by a factor of %800. That is about a large as you can go and still fit within the print volume.

If you go smaller, you probably want to find some ball bearings instead of printing the plastic balls which are so light they tend to speed up and bounce a little to much.

In fact the device will work better with heavier balls even at full size.

1) Board: Print the board using rafts to try to minimize warping. Standard 0.20 mm resolution is fine (and you won't want to wait any longer).

2) Pegs: Rotate the pegs so that they lie with the flat portion on the build plate. You will need to print 28 of them. I used 0.10 mm resolution.

3) Funnel: Print the funnel upside down with the mouth of the cone on the build platform. 0.20 mm will work. No rafts, no supports required.

4) Balls: Print as many as you can! You will need to use rafts but no supports are required. Print at 0.10 resolution. IMPORTANT: make them as dense as possible. I used an infill of 75% but I would recommend 100% if you can.

5) Triangle Overlay: I printed this using rafts and at 0.15 mm resolution.

Assembling the board is easy. Simply insert the 28 pegs into the 28 square holes that form the triangle. Leave the upper two pairs of holes empty. Those are for positioning the funnel for different experiments. The pegs actually have a slightly rounded side. Try to face that side forward.

Plug in your funnel and drop (or pour) the balls in and what them fall into the bins making some turns along the way.

The board is already tilted but you may have to play with the tilt of the board some more. I find that tilting it up another 10 degrees or so makes it work quite well.

When not running experiments, you can leave the triangle overlay on the board to remind people of the combinations.