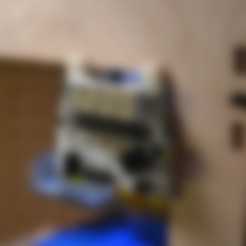 This was originally designed as a joke which went something like this: Now, your already awesome MakerBot can be made even more awesome with mounting brackets for the DIY ClockIt Kit [ http://www.sparkfun.com/products/9205 ]! This way your MakerBot can not only print 3D objects, but tell time! 1

After printing this out, while I was adding it to my bot, I realized that there was a practical use for this, other than the joke. It could be used for time lapse videos for displaying the passage of time, It fits nicely into the upper right of the frame, or a stopwatch for the time your bot has been printing an object.

It may be nice to have a custom program for the ClockIt that is more of a stopwatch rather than a clock. I don't know if I will be able to get around to writing one, so if someone is ambitious, go for it!