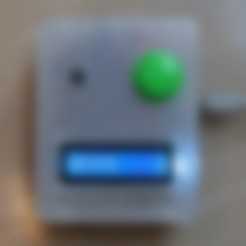 The Certamen quiz team competition from the Junior Classical League involves quiz questions on Greek/Roman subjects. Individual contestants press buzzer buttons when they have an answer. The machine keeps track of the order in which buttons were pressed, subject to the team-lockout rule that once a player on a team presses a button, the other presses from that team don't count. The machine we built was for three teams of four players each. Additionally, so that other school groups could use the machine as a standard quiz machine, there is an option to disregard teams and just keep track of button order.

The school Certamen team needed a machine to practice on, but the official machine is $545 for the standalone system (a variant that plugs into a computer is $435), which was budgetarily infeasible. Plus obviously overpriced!

So I designed a much cheaper one based on an Arduino Mega. It's not approved for official tournaments, but it's good for practice.

This Thing contains the main box and the button boxes. Firmware is here. Build instructions are here.