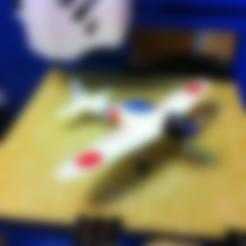 Back when I only had white ABS I was trying to figure out what I could print out that had a base color of white. After printing out the Starship Enterprise, I was at a loss.

One of my favorite airplanes is the Zero fighter, the early models of which were white! Perfect. Some CAD and printing later, and I had a model sitting on my desk. Now I have an opponent for my desktop P-51, B-17, and P-40.

Unfortunately, this model pushes the limits of the UP! printer (hence the work in progress) and there is some unfortunate clipping that happens in the printer's software. It works well enough that I won't be fixing the files anytime soon, but there will be some details lost.

The plane has landing gear that can be glued or just friction fit into the wing. There is also a stand. The propeller can be just the hub (to simulate spinning) or a full 3-bladed model.

Print nose down with support.