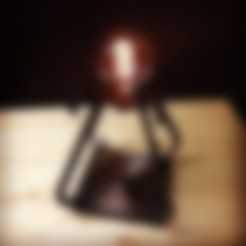 Nikola Tesla's wireless power transmission was my inspiration for this project.

In order to power this lamp, you'll need to construct a 30W resonant induction transmitter at minimum. My transmitter is current-mode class D. In my setup, I chose 6.5MHz and built the transmitter into the underside of the table. It's advisable to use an ISM band. The transmitter is tunable and the receiver is not.

Don't re-scale! I printed with a 5th Gen Replicator. The resonant frequencies will change depending on the inductor geometry. I printed with 3 shells, 15% in-fill and 0.2mm resolution. The parts fit together fine for me. Some CA glue in certain areas will be necessary.

The receiving spiral inductor is made with ~7.5ft of 1/8" OD copper tubing and has a final form inductance of approximately 14.1uH. The primary inductance coil is a center-tapped 1/4" copper tube of 2 winds and is approximately 0.34uH. An extra resonant coil is put into place beneath the table, whose inductance is not as important but area is more so, and is tuned to 6.5MHz as well. This 1/4" OD coil improves efficiency. The power is transferred from the secondary resonator to a single copper loop coupling to the resonator which is directly wired to the bulb. In order to power anything efficiently coils and loads should be impedance matched.

If there's interest in the circuit I will disclose it, but that's beyond the scope of this.

I chose a vintage "Tesla globe-style" bulb reconstruction as a commemoration for his work in wireless power transmission. Were I to have chosen an Edison or Marconi bulb, Tesla would be rolling in his ashes. :)

One of the lamp legs is built in two pieces and has a conduit for the bulb wiring. If you can construct a transmitter, I expect construction of the lamp base to be straight forward.