Currently building a Tronxy X5S and I can't help but feel a bit disappointed with some of the "Out of the Box" design issues with this printer. Saying that, it would appear that the company listen to the feedback as there seems to have been several design changes to the original machine spec.
My first issue was with the gantry carriages. The way the flimsy acrylic is used to pre-tension the V-wheels is diabolical and was bound to fail sometime in the future. The design meant the gantry was really stiff to operate and seemed to be out of square, despite much tinkering with belt tensions and checking of frame squareness etc.
I downloaded and printed a set of the "Mega Gantry blocks" by "Graham01" which looked great. The problem is that it looks like the design of the extruder carriage has been changed and now has a rear mounted belt attachment point which collides with the Mega Gantry blocks.The new design also means the the belt path geometry is out of alignment.
Speaking of belt path, I then worked out that the reason for the stiffness in the motion of the gantry, especially in one direction, was significantly due in part to the utterly crap design of the belt idler system. A ball-race, sandwiched between a pair of fixed penny-washers using spring washers as spacers meant the bearings did not sit perfectly horizontal and caused the belt to ride up and rub hard against the non-rotating penny-washer, creating friction. So they had to go. I downloaded and printed off the corner pulley guides and the gantry pulley guides by "HanCheol" and had a go at fitting them. These are super strong but I had a bit of a problem fitting one of the T-slot nut as it clashed with the frame fixing screw head inside the aluminium extrusion, preventing the nut from rotating and locking.
So, I've had a bit of a remix. I hasten to add that as I couldn't use the mega gantry blocks STL's in Fusion 360, I scratch drew them up but they are based on the original design by graham01. Consequently, the gantry pulley guide is also scratch but of similar design to that of HanCheol.
The Corner pulley guide have had a simple change in that the fixing hole nearest the corner of the frame has been moved a couple of millimetres to clear the screw head. This allows the T-nut to turn and lock into place so an otherwise excellent original design.
The Gantry blocks have had a clearance slot made into the X axis support to allow the rear of the extruder carriage to pass above. The hole for one of the idler pulley screws has been realigned to provide a straight belt geometry between the corner idler and the extruder carriage. The mounting hole is now threaded M5 to remove the requirement of fitting a nut underneath the carriage block. The 2nd idler pulley now shares its axle with the rear inside V-wheel. To avoid preloading the pulley bearings whilst securing the V-wheel, an hexagonal hole is now located in the spindle hole for an M5 nut to be fitted. This allows the screw to be moderately tightened from the top to avoid crushing the pulley bearings but allows the V-wheel nut to be tightened firmly to prevent any play. The gantry pulley guides then had to be redesigned to fit the new configuration of the carriage blocks.

Update. 24 Mar 19. I've added a Version 2.1 for the gantry Pulley supports. The only difference is the addition of a hole directly above the screw which secures one of the T nuts in the top of the gantry (X axis) beam. I realised after printing that this would become a bit of a pain if you need to slacken to adjust the width after fitting all the block wheels. The hole is 5mm diameter to allow for either an Allen key or a pozidrive screwdriver blade to pass through.

Update 26 Mar 19. This is pretty much complete now so I'm taking the "Work in Progress" status off. I still intend to make some motor mounts to replace the crap OEM ones and that will ensure geometry is maintained but I'll update when I get round to it. I'm still in two minds about the limit switch bracket too as I quite liked the adjustment with the screw.
Any feedback welcome.

Update 24 April 19. Motor mounts are now designed and available.These are screw adjustable and maintain the correct belt path geometry whilst providing a strong and rigid mounting for the steppers. the detailed instruction are on the link here: https://www.thingiverse.com/thing:3584805

Update. 20.09.19. I've added a version 2.2 of the gantry carriages with a modification to the front outside edge. I noticed the limit switches were being contacted virtually flat on to the front of the carriage and this could give the switch body a bit of punishment, so I've added a 3mm protrusion which contacts the switch lever and allows the springiness in it to absorb the collision forces rather than the switch body. I've left the original files on here as well, just in case someone feels they can't live without the additional 3mm of full motion. 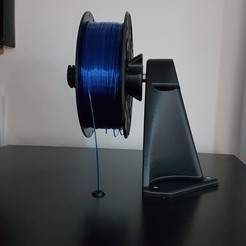 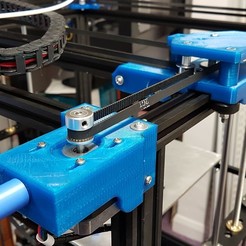 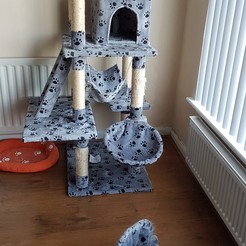