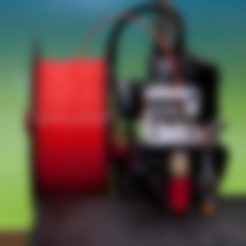 The most compact way to add a filament spool "inside" a Printrbot Simple Metal.

This spool holder prints in one piece and it fits the bed in the design orientation. As designed it should fit most spools (up to 92mm wide and 200mm diameter) but just in case you need to modify it I have included the OpenSCAD source as well.

Background: I wanted a spool holder that kept the spool in the vertical position (such that it doesn't unwind), in a secure way and something that doesn't take additional space on top of the printer. What I settled on is another cantilever principle holder (same idea as my t-slot spool holder) but this time I had to reuse one of the screws in the printer (one of the screws that mount the Z stepper has to be "upgraded" from 16mm to 20mm). The two slots have triple purpose: 1) save some filament 2) increase tear resistance (shells along tear force) 3) aesthetics

I printed mine at .25mm layer, 50% straight infill, 3 shells and seems plenty strong. It takes roughly 1 hour to print on Printrbot.

To mount: remove the one of the Z stepper M3 16mm screws in the back (look carefully at the pictures to see which one) and replace it with an M3 20mm. Better yet, use an 22mm screw and a washer.