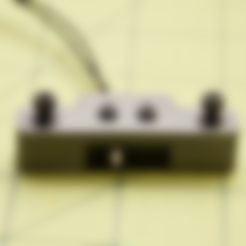 A compact, enclosed endstop for the Bosch-Rexroth PSK60 linear actuators.

It replaces the factory default aluminum tabs at either end of the actuator and besides being an end-stop, it also a) holds the magnetic strip in place and b) functions as a crumple zone in case of a crash (which I have not tested and don't plan to :) but the theory is the micro-switch position is adjustable such that the carriage first triggers the endstop then stops in the plastic buffer in case of a crash without crashing the microswitch). I have also not attempted to measure repeatability but it seems to perform very well in practice.