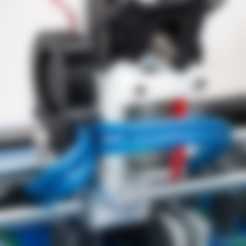 Uses two 25mm M3 screws for the clamp. The original 8mm M3 screws can be used to mount the base, but 16mm M3 screws would be better. The 30mm fan can be installed with four 16mm M3 screws, or the included plastfast screws.

I also lowered the original plate slightly by replacing the bearing and belt mounts (parts 430288 and 430289. The extruder cable strain relief in the picture is part 408352

There are two versions of this design. The older version does not cool the lowest fins on the E3D, but works with the original bearing mounts. The newer 32mm version raises the hot end to cool the lowest fin, but will require replacing the bearing and belt mounts.

The part cooling parts use a 50mm blower fan and aquarium airline tubing, and only works with the 32mm version of the mount.

Requires support to print. The filament opening on the older mount should be drilled out slightly to get a smooth 2mm opening.