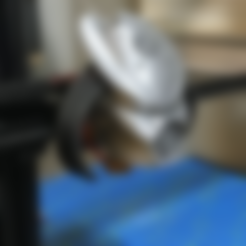 Like Doc brown once said "If you're gonna design a Time Machine, why not do it with some style!"

I have a few cooling mods that didn't make the build plate I also will release, Aliens themed, Doctor who etc. I made this for myself, for fun - it's not perfect but the first print was good enough to use, could have some improvements but as I said, it was just a fun project, but I posted this on facebook and had about 100 requests to post the files, so here they are, I never really intended to upload it.

Unlike alot of other cooling ducts, this is not designed to blow on the tip of your print. This was designed for a large format printer. I am printing up to 400mm wide and fast, so the airflow needs to be more directed at the bed rather than the tip for my needs. You can of course angle the pipes in Blender or another modelling program if you need more of an angle.

I recently got a Wombot Modus and wanted to alter the cooling in it as the stock one was too aggressive and also cooled down the nozzle too much during the print rather than just the plastic which led to some dramatic temperature drops and cold extrusions. I wanted a cooler that wasn't too full-on, but did the job. It has to clear the MK8 offset, and also allow for the air intake from both fans and the filament to feed cleanly, and this was the one that seemed the most logical (RIP Spock)

Uses a 30mm fan (same as on most E3D extruders) and screws directly into the front of the existing extruder assembly.
*NOTE - You will need to cut a very small notch out of the box for the wires of the 30mm fan, It was an afterthought and instead of re-printing the entire tubes, I just made a small notch for the wires to come through and still allow the box to snap tight.

Notes:
You can print this cooling duct happily in PLA as nothing gets too close to the heater block.

I used Meshmixer to generate minimal supports for both parts. Feel free to change the orientation of the pipes when printing. I printed the pipes on a CTC with a cooling mod, they didn't print so well but they didn't have any holes so I ended up using them anyway. The pred head I printed on the modus, and without any cooling at all it didn't turn out too bad.

Additional
You will need to seal the box underneath somewhat, I found the seal was good enough but I wanted it airtight, so I put some hot glue on and then snap-locked the pipe box in place.

Thanks for downloading, If you enjoy my models here, I guarantee you'll love the ones on my Patreon! :)
https://www.patreon.com/Geoffro