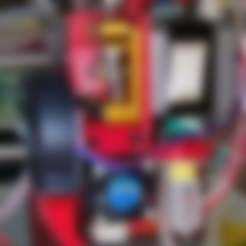 Hi friends,,
I recenty changed my original Geeetech hotend. I replaced it by an e3dv6 direct drive. It was necessary to print new mount to use it.

My mount had to :
- be usable with the original X Carriage of Geeetech
- have a cable manager to avoid spaghetti dish around the hotend
- allow fan install
- allow 3dtouch install
By the way, I was needing a Z endstop lifter because the e3d is longer than the original hotend.

But these objects were not really adapted for what I want to do.
I was hesitating for use original X carriage or a modified one. Finally I decided to keep the original and did't use the "Prusa I3 extruder carriage for MK 8 extruder". But I added one more constraint : my mount had to be compatible with the modified carriage X of ritaxiang

Now, all the componenents were found, it was the time to play Harry Potter !
First, I made the modified Z endstop (and published it on Thingiverse : https://www.thingiverse.com/thing:2601219)
Then I started from StevenQ-NE-UK mount. As I prefer having the motor on the right, I inversed its mount (all my things can be used with the mirror function of your slicer if you prefer motor on the left). Then I added the motor cable guide of Kiruban.

After that, it was time to make modifications for making the mount compatible with Geeetech X carriage. The problem is from the head of the screws that make a space between the X carriage and my support. To correct that, I added two strips on each side of the screws.
If you want tu use the X carriage of Ritaxiang print it's carriage (https://www.thingiverse.com/thing:2238344) and "tg-plaque-ritaxiang.stl".
If you want to keep the Geetech X Carriage, only print "tg-plaque-geeetech.stl"

Ok. We have a mount for the e3d. If you only want to install the e3d, you only need the piece to block the tube. This is "tg-bloqueur-std.stl". I use 2xM3 30mm screws. In this kind of objects, where it is uneasy to maintain the nut in the hole, I add a piece of foam then a scotch tape to maintain. If your need is only to have a e3d support with cable guide, that's all folks !

The fan. As I said, I used the fan of mrah (https://www.thingiverse.com/thing:2333438) but I modified it because on my machine, If I let the fan in the continuation of the motor, it hurts at left when a "home" command is done. So I inversed it, puting it outside. But I kept the hole to fixit on usual way if you have not my problem. The file is "tg-ventilateur.stl". Note : Repetier Host warns "non manifold". But, I have had no problem for printing.

The 3dtouch. I no more use 3dtouch but I suppose that some continues. So I've made a mount for it. It works like for the fan (the fan is mounted left and the 3dtouch right... on my orientation). The file is "tg-3dtouch.stl". I have added a piece of 2mm. If your 3dtouch is too high with the stantard mount, use it to lower the 3dtouch.

For printing I used an infill 40% and supports.

[Update Feb 2, 2018] It seems that the module for 3Dtouch be weak. "le_joebar", a member of the french forum lesimprimantes3d.fr redesigned it. I added the stl file (3dtouch_le_joebar.stl) and a picture. Great thanks to him. 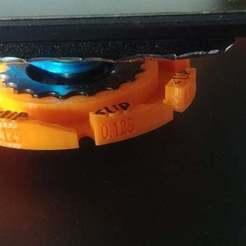 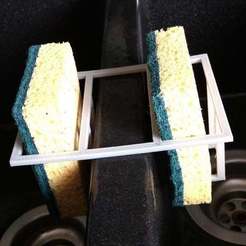 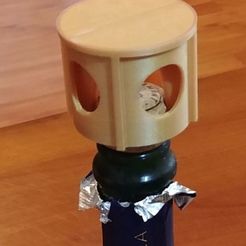 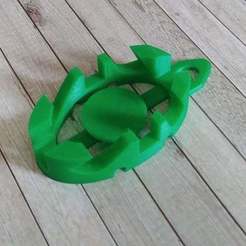