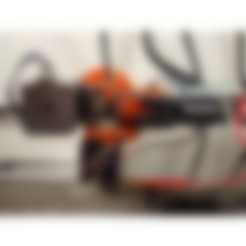 This is a Geared Extruder that can be used for 3mm filament.
Of course you also could use it for 2.85 and 1.75 mm :-)
I made this one to fit to the K8200 of Velleman because the old extruder did not want to go any more. The gear ratio is still the same as the old one so there is no change needed in the firmware
The filament guide part can be drilled to size of the filament you use.
The driver part of this Extruder is an M8 bolt that is turned down to 5 mm on the end to fit the filament driver gear. For the dimensions please see the pictures.
The part “hot end bracket part1.stl”can be changed for “hot end bracket part1 2.5mm higher.stl” if you Hot End is higher. I first wanted to use a cheap Chinese Hot End but later switched to a Europe made one and the Bowden connection makes this one a bit higher. For that I had to make this “hot end bracket part1 2.5mm higher.stl”.
For the additional parts please see pictures :-)
The dark gray parts are printed in PET-G Carbon and the Orange parts are printed in ABS.

Hi! I started my own website now. All new models I make will be posted there first from now on. I may post some in the future, but only when I have time. To see all my new work, go to: https://www.designuitinspiratie.nl/. Yes it's in dutch, but you can set it to the language you want. It's on the top right corner of every page :-). With the exception of payment models. If I have new ones, I will still offer them here :-)

You can support me : PayPal.me/jobsmolders