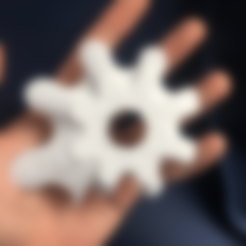 This object tests the capability of the printer to print overhang from 40° to 75°.
Three curves including straight line, convex arc and concave arc are used to generate test form.
Previous overhang test often test with straight lines, which is essentially bridging instead of overhang. The convex surface would give the worst scenario of warping while printing overhang. Concave surfaces perform much better than convex.

Recommended to print without infill and top.
Let's see how you go.