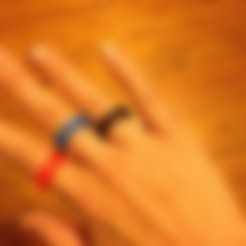 Learn how to make it yourself in the OpenSCAD tutorial in Getting Started With MakerBot: shop.oreilly.com/product/0636920026723.do

I have uploaded two versions of the code:

- Version 1.0 is the basic version from the tutorial in the Getting Started With MakerBot book.

- Version 2.0 is the same object, but the code creates the square cutouts using iteration over a vector of vectors (rotation).