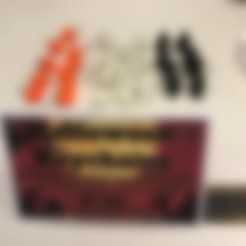 Hey guys! I know it's been a while since I've really posted anything. Don't worry, I got some more stuff to upload in a bit!

So, I decided to make a sequel, called Star Wars Keychains II. Just kidding. Halloween is coming, so I have scrambled to design, print, and share halloween keychains!

There is a pumpkin, a ghost, and a cat (black cats, but also an excuse because everyone loves animals!). I sold these at a bake sale for our school's robotics team, and they were all gone by the end of the day. I hope the same is for you! It isn't too late to make them, and they would make great trick-or-treat gifts!

I love printing. In my free time, I am almost always 3D printing something or designing. I use my Original Prusa i3 MK3S (with a semi-reliable MMU2S) to print all my models (well, all models after September 2018) and teach some kids at the local Elementary School. :)