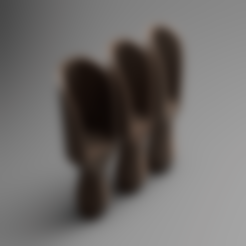 My mother had a wooden sugar shovel and my sister also wanted one of that size. My father then said he would like to have "one number" smaller.
So I took my calipers, took some measurements and created a quick model in Fusion 360. Nothing fancy but it should be close to the original. Because I did not know what "one number smaller" should mean, I created two smaller variations.
I was low on time, so I printed the smaller ones and gave them to my father. And now everything went differently than expected. Both prints were too small but the wooden one was perfect in size. And my mother said that the original was actually too big for her. So she picked the small ones and my father got the wooden one. Who could guess that at the beginning?

You want different sizes but you don't want to scale the stl files? No problem. Lucky you - I've attached the Fusion 360 files.