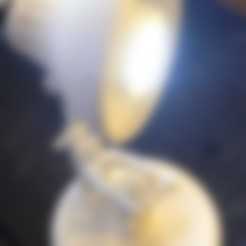 I created a small light attachment, which is battery operated, and fits into the head of the lamp.

If you have an existing printed version of the lamp, you can add this to it, pretty easily. You may need a dremel tool to extract away a little of the plastic, so you can add the switch and mount the little light. This is what I did.

I've created multiple pictures of the process of soldering, cutting wires, and adding the LEDs to a round PCB, which you can get from Radio Shack to build this little light.

The light works with a little switch in back, and works quite well really.

It's not to heavy, because it uses button batteries, (four of them) at 1.5 volts to provide power.

The only thing you'll need to fine is then sheet metal, which you can get from home depot, or maybe radio shack, i just happen to have some I took from some old electronics. You'll need that for the battery case. Then last, but not least, you'll need LEDs. I'm a bit strange, as I have hundreds of these around for other projects i'm doing, but you can order them online, or pick them up from an Radio Shack or an electronics store. I included a picture of the back of 800 I have of the type i used, which were small LEDS, but you could use pretty much any LED you want.

The case I have here that you print will hold all the electronics and fit right into the lamp.