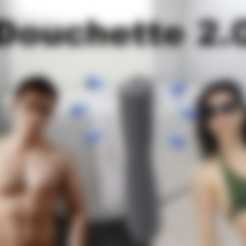 Have you ever faced the problem of two-person showers? If so, you yourself know that it is the war for the monopoly of the shower. If you have not had the opportunity to take a shower, the object may be an argument for it to happen.

With a contemporary design, this shower will allow you to take showers with your spouse (or not, but that's your concern). Equipped with a selector, you can also switch to solo mode, which will save you from putting water everywhere in this case.

Assembly level nothing more simple, the object is composed of three pieces no need for a drawing, though, I'll still put a notice in appendix. [Small tip: Put a glue point between the wheel and the selector]

And how does it work? Basic as Orelsan would say, we take our assembly, we remove our old shower head and put the new, then just turn on the water. Since the water pressure is halved, you have to open the valve fully. In solo mode, simply turn the selector using the wheel to block one of the two outputs.

Well ... I'm more designer than Maker but all I can advise you is to choose the right direction of printing, because normally there should not be too much support. Then, in my opinion, it will have a fairly high filling,
both for the general resistance of the object that for sealing. And then for the rest, I wait for your feedback, there are surely improvements to make!

nice,but what is the size for use? because it's very smal size when i dowloaded the file.
thanks