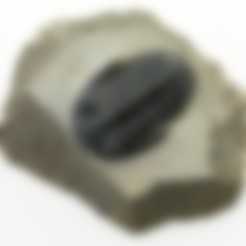 Trilobite from the collection of Museum Victoria

This model is from a scan of a fossil from the collection of Museum Victoria. A small portion of the original matrix has been removed from the base of the model.

The full model has been successfully printed in PLA on a Replicator 2 on the standard medium settings.

We found that greater definiton in the print can be achieved with the trilobite in a vertical orientation. In the additional STL files (Cut 1 and Cut 2), the model has been split to facilitate vertical printing.

As the state museum for Victoria, we are responsible for looking after the State collection of nearly 17 million objects, documents, photographs and specimens