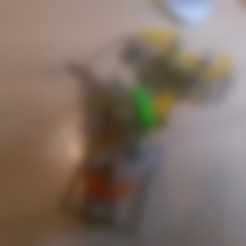 The Thames and Kosmos Remote-Control Machines set's robot arm has too weak an attachment for the up-and-down (altitude) motion's worm drive--the upper part of the worm screw's axis is attached to a piece that has too much play, and the worm disengages the worm wheel. It would be pretty easy to reinforce this with a 5x hole piece and two studs, but there aren't enough studs in the set.

So I designed a simple reinforcement piece. In the photo, it is the green piece. You might want to adjust the tolerance for your printer. The spacing between the two studs is the same as in a 5X hole piece. Placed diagonally, the piece doesn't fit exactly and hence induces some pressure drawing the worm screw and wheel closer together, which I think is all to the good. But if you want the piece to fit a bit more easily, change piece length from 5 to 5.24.

This piece might be useful for other Thames and Kosmos related purposes.