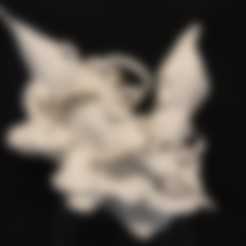 Here is a model from our archives. Developed By Bin Li, this epic model prints beautifully at Z18 scale.

We asked Bin Li a few questions about his background and process.

Can you describe your journey as a designer - how did you get started and what motivated you?

The journey started late. In fact I didn't start art training until college, where I was studying computer science around 2005. But then weird enough, a close encounter with drawing and painting opened up a whole new world to me. I decided to be an artist to create and to fulfill my vision. 3D Animation and Games was the fuel of my passion, that's why I went to Ringling College of Art and Design to study Computer animation. Since that, I worked as a 3d modeling and designing artist.

What was the creative process like for this model?

It started as eagerness to create something with power and impact. I pitched an idea of a prehistory creature and a journey on a ship, using a classic book in the public domain as an example.

After that, everything went smoothly. I re-read the book, gathered visual reference and other images of existing designs. Explored a few sketches of a new designs of the submarine and the squid first, then did more sketches of the overall composition and pose of the sculpture. After the 2d sketches were approved, I started 3d Sculpting. From rough to refined, until things were finessed and ready to print.

Any background on why you chose this model?

I enjoy doing creatures. Hard surface model is a lot of fun as well. So this one is a good mix.

Describe any challenges you had in getting a successful print (tricks of the trade)?

The pose of the tentacles and waves gave some trouble. They had to be modified a few times after test prints.

What advice do you have for someone interested in designing 'one piece' prints?

Test print in early stage so problems don't come near the deadline.

Bin Li rew up in China and went to Florida in 2008. He got a BFA for computer animation in 2012, went to Digital Domain working on animated feature film. Moved to New York City in 2013, worked on visual effects on TV commercials and worked at MakerBot from 2014 to 2015.

Go forth, download, and print it. Make sure to share pictures of it on Thingivers so we can all revel in the glory of this epic model.