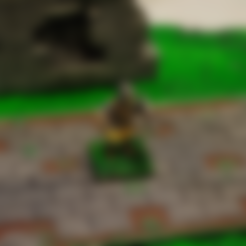 'ROADS!' (which is what I thought Ray Winstone et al were bellowing in the movie 'King Arthur' until I listened a bit closer). Anyway...roads - lots of 'em. Principally designed for the 28mm wargames market but suitable for D&D, historical dioramas etc etc, the modular-build roads represent a variety of styles, largely of a roman vintage, shown initially as a brand new road, and then the same one in a post-roman / Dark Ages state after decay, lack of maintenance and people 'borrowing' stone to build dwellings or a new shrubbery (for all you Monty P. fans out there!) have taken their toll on the surface. All new roads have a slight camber, a gutter and a drain at the junctions.

Part A (here) represents close-paved roads probably used more for towns and cities in the posh areas.
Part B - http://cults3d.com/en/game/roads-old-and-new-part-b represents a more stone-mosaic style road suitable for regular roman roads
Part C is a small-shingle/cobbled style of road - unfortunately there will be a bit of a delay on the 'old' one as I accidentally overwrote an unmerged model with a merged model, and now I can't use that as a template for the other shapes - I'll carry on when I've finished banging my head against the wall !!
Part D http://cults3d.com/en/game/roads-old-and-new-part-d is a packed earth road for those out-of-the-way roads that didn't get much traffic or attention. The old version is basically a mud trail. It dawned on me later that the new variety could be almost any period road.
Each set of roads contains :-

a straight piece (the 'old set' in Part A has two for variety)
a short straight piece (half of above)
a double straight (almost a double straight as it was coming off the end of my printer)
a 45% bend
a T-junction
a crossroad
The plastic wargames figures shown are Gripping Beast 28mm plastic vikings, plus one or two other figures from my models I've also put on Thingiverse. I'm painting the saxons, honest, but slowly...

Notes:
I kept the rafts for these roads as they seemed to gave a better grip on material surfaces. The long straight may need a raft as the corners have a desire to lift off the printer bed without one.

If you're picking the roads by file name, they are all in the sequence
[Part letter] [Old or new] [road type] _ number
where Road types are:
str - straight
hstr - half straight
lstr - long straight
45b - 45 % bend
tjx - T junction
xrd - crossroad

So:
a_o_lstr_1 will be the first long straight for Roads Part A in the Old style (beat up)
Hope that makes sense!

Painting
I used a gesso undercoat, but an acrylic spray may be needed to ensure that the depths/cracks of the paving get covered completely (otherwise the acrylic wash runs off )
I used a black acrylic wash to make sure the cracks/gaps are covered, then dry-brush the surface with whatever colour you desire. (I inked the cracks here to get them to show up in the photos)
I used a soluble acylic matt varnish to top them off