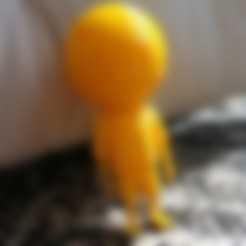 "Moon Man was once a normal person, but one day he was hit by a shooting star right in the head. Now his head is replayst by a big rock, which was the shooting star once. He is the same person as before but he has a massive headache all the time."

Moon Man is just a sculpture of a drawing I once drew. He does not stand but you could glua him on a stand.

He is 10cm big but you could scale him down for tabletop games.

Just print the body and the head and stick them together with glua, I used super glua

Hello , I am Janis Bruchwalski.
I use an Anet A8.
For modelling I use Blender.
I mainly create toys that are small and fun.