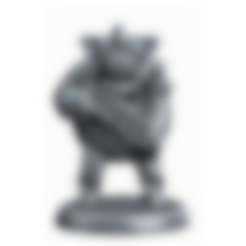 "War Pigs aren't your everyday, 'average Joes' from Pig-Earth. These baddies will blast you apart with scrapped weapons just as quickly as they can mow down a four-course meal."

(This character was sculpted for an upcoming "Pocket Tactics" set, but it can be used for Wayfarer Tactics and RPG system- or anything else! Like everything else in the Character Compendium, this post contains both the split and whole version of this model. Enjoy, everyone!)

This character was designed for Ill Gotten Games' sci-fantasy tabletop RPG, Wayfarer: Things Beyond Wonder and for their modular wargaming system, Wayfarer Tactics. If you want to print a 28mm scale version, just scale it up by 166.6%.

If you've got some bones to spare, check out Ill Gotten Game's Patreon Page and show them some love!

I am an aspiring toy maker! Enjoy!