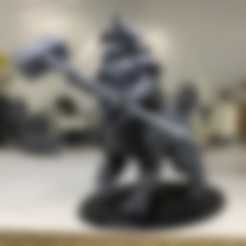 Kholek Suneater is a Shaggoth of tremendous age. He is one of the first-born kin of Krakanrok the Black, father of the Dragon Ogres. Kholek was present when the terrible pact with the Dark Gods was forged, pledging their race to an eternity of servitude in exchange for immortality. The sagas tell that Kholek’s part in the bargain was such an affront to nature that the sun hid its face behind a bank of stormclouds and has never looked upon Kholek since that fateful day. True enough, Kholek’s coming is heralded by roiling black thunderheads. Where the Herald of the Tempest walks, a raging storm blots out the sun.

Like all Dragon Ogres, Kholek is energized by the power of lightning, roaring with triumph as crackling bolts of pure energy envelop his entire body. He wears great plates of Carbon-Black armour, the better to attract the tempest’s kiss, encrusted with the patina of age and blackened by soot. In his shadow march the mountain tribes that worship him as a primal god of destruction. A true champion of the Ruinous Powers.

Included here is Kholek himself, wielding Starcrusher. The lower body was printed in all FDM, and the Upper Torso, Tail, and Hammer were all printed in SLA. The 3mf file included has Kholek with all their parts separate for those that want to adjust them, as well as the base. This is made for a 170x110 base, as Kholek does not have an official model, and since he is the largest of his species, it would probably be best he be put on a base one size above the standard Shaggoth. 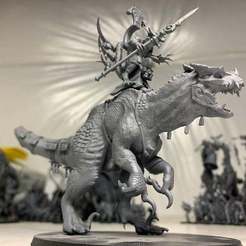 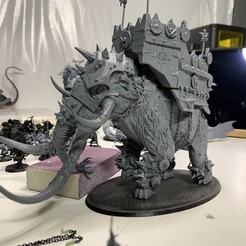 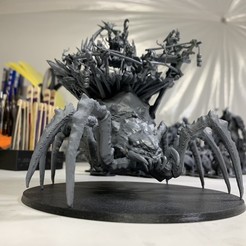