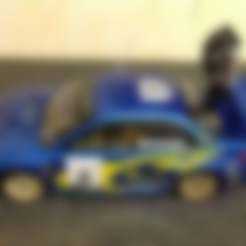 Another day another gopro mount.

When I got my gopro there was a few things I wanted to do with it,one was to put it on my r/c car and another was to mount it on a quadcopter that I will print, the quadcopter is a project for a later date so I started looking at mounting the camera to my 1/8th scale Kyosho nitro car (think its 1/8th scale).

I removed the rear arm that holds the shell in place and made a mount that incorporated this part all in one piece.

The arms for the shell are the original ones off the car and are 70mm apart to the outside of the pins.

I will take it out for a run as soon as possible and upload the vid of it in action.

Have fun people and If I don't see you before have a good new year ;)

when printed I removed the original pins that hold the shell in place and fitted them to the printed part.I pilot drilled a 1.5mm hole in the flat edge by the hole and fixed using the original screws.

I then placed it on the car and marked out the hole positions I wanted to use and pilot drilled these before fitting the screws.

If you do not pilot drill the holes you risk splitting the part with the screws.

I cut a small hole in the rear window to allow the arm through and replaced the thumb screws with M5x20mm cap head bolts as there is not much room available.

The shell can be fitted with the clip and fist joint fitted then put on the case and second joint with the other cap head screw, on mine there is enough room under the rear spoiler for the allen key to do up the screw. will depend what shell you have or if you run without you could probable use the original thumb screws