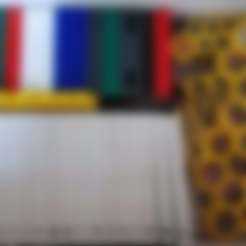 I really liked Knekkebjoern's storage boxes (https://www.thingiverse.com/thing:2705022) but they didn't really work for me. So I've created storage boxes with exact spaces for each monster. I've also grouped monsters so you have less boxes. I've tried to group the monsters as logical as possible or to limit the amount of required boxes. There are 10 in total.

Edit: Bosses are now done as well. In the photograph there are no indents for taking the monsters out, I've fixed that in stl files.

Edit3: The divider (that go into the slits of the card box) both (long and short) have two versions: tight and loose: these are two different lengths which depending on your printer work best. You'll have to check which suites best.
The HEX adapter you find amongst the files is not required, I noticed that with one hex box the tokens fell out (hole too large) so created the adapter to fill it up. But I later fixed this issue. Still, if you're planning to do other stuff with the boxes than initially intended it could be useful.

To keep things a bit clear, I've renamed all the files so there more easy to find.

In case you're wonder what the (excel) list is among the pictures: its an overview of which monsters go together in one box.

And that means that I'm done. Perhaps I'll find some other things to tinker with, but this now is a full storage solution for gloomhaven.

I've added the Fusion 360 files as well, so other can improve change as they seem fit. Some reference to my work though would be appreciated.

As for that matter: there's one file with '(not mine)' in the title, that is created by: Noggog, I've added it to my files for completeness. (s)he based this on a container of directsun, but I've recreated that box and made a tiny improvement.

Hi, thank you for your feedback, much appreciated!
1. I did consider this, but my printer is rather large 300x300 print service and thus the prints a bit less 'tight'. So adding something like that requires a certain amount of tolerance, which would make it useless for 'tight' printers. That and there's the issue of overhang (if I would do it on the lids).
2. the reinformcemen is something to consider
3. the 'flang' (don't know the word, but Im fairly certain what you mean) is an old mistake which is long fixed. Actually I made more updates to this print, however the owner(?) asked me whether he could mirror my files on cults, to which I agreed, and I assumed that any updates would get mirrored as well...apparently not. I don't want to start maintaining several websites, so I can only suggest to find my stuff on thingiverse!

Completed the whole set But i would recommend two things: 1 some form of snap for ALL lid pieces. The walls are thin enough there should be a small form of flex that could accommodate a pressure bump and depression in the mated surface to help lids stay on. If the bump is too much perhaps lowering the tolerances between the mating surfaces. 2: thickening just a smudge all of the wire frame hex boxes with better reinforcements. On of the lid pieces has flangs on the top and bottom and the the piece on top doesn't make sense and should probably be removed. all-in-all a very complete set that makes storage much easier. especially after address those two points^