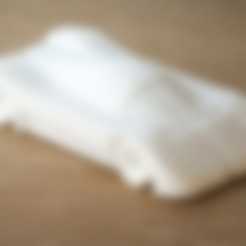 This car model is loosely based on a mercedes C9 le man car.

The model was split in half as it prints better this way. Unfortunately on my set up it warped quite badly and so it could do with some tweaking.

The model is pictured in two halves but can be glued together on an unwarped print.

I've uploaded a step. file for anyone who would like to edit the model.

UPDATE1- I've added two more files, an stl and stp of 'car thingi whole'. This is the same model which will probably require support material but you won't need to glue the two halves together. Thanks for the suggestion jfpion.

Please upload a photo if you print one :)

The example pictured was printed at 0.2mm on a rep2 with a 25% infill which is definitely overkill. I also halved the default extruder speed in makerware in the hope of improving surface finish. It took about 4 hours to print. The arctic white plastic is from faberdashery, definitely recommended despite the price.

I would also suggest enlarging the stl file before printing, as you can see on my print the wheel arch was too thin so it hasn't been filled in properly.

The wheels were super glued in place but I'm sure someone could modify the car to allow for rotating wheels. The aim was to glue the two body halves together, which should be straight forward as long as your model doesn't warp!

I positioned a number of ear rafts around the car from whpthomas http://www.thingiverse.com/thing:38272. The aim was to reduce warping although the blue tape I was printing on started to lift off the build plate, I think printing PLA straight onto the build plate would be fine or just using stronger wider tape.