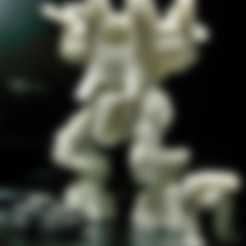 A complete re-design of the original Emperor titan miniature produced by Games Workshop for their 6mm scale table top wargame, Epic 40,000 (and precessors/successors). They have since abandoned all support for Epic, so I modeled this in Autodesk Inventor for any avid wargamers who still enjoy playing Epic and don't want to use proxies or pay through the nose for OOP official models off Ebay.

I haven't tried printing this model in an FDM printer so I can't recommend settings or methods of optimization.

Epic has been re-released as a titans-only game called Adeptus Titanicus. It is nominally 8mm scale instead of 6mm, so I suggest that anyone wanting to print this for AT gaming or to play 8mm Epic should upscale it by 125%.

This project has been on the shelf for a couple of years now so I'm uploading what I've completed for the community to play around with. Hopefully in the near future I'll complete and upload the following components;
-Plasma Annihilator
-Hellstorm Cannon
-Head
-Apocalypse Missile Launcher
-Quake Cannon
-Point Defence/AA Turrets
-Extra Details