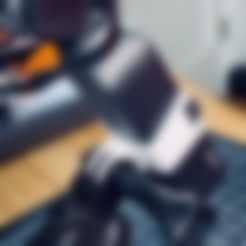 Got your fancy new gimbal but can't mount it anywhere? Print one of these!

2019-01-11 Update: Just got my official DJI Action Cam Mount in the mail.. I won't be using it. It's HUGE, takes over the accessory port, and makes you remove and store the phone plug somewhere (and loose it). It's also just overly beefy for this intricate camera. I'll be sticking with my design.

2019-05-16 Update: you know you've made it big when the thing you design is copied and apparently available on amazon.. right? If it's easier to buy it there than print it I recommend you do, it just doesn't have any cutouts so you'll have to mount it further down below the buttons. My design lets the phone adapter act as a keyway and lock it in place higher up on the body.

I've so far used this mount on my bicycle helmet for excellent footage up to ~25mph and on a motorcycle helmet chin-mount up far past 70mph and gotten gorgeous footage. Here's a video of motorcycle riding at night

These take ~30 minutes to print. You can easily adjust the wall thicknesses and such_ in onshape. Most of these are Designed to be printed with supports.. they pop out super easily.