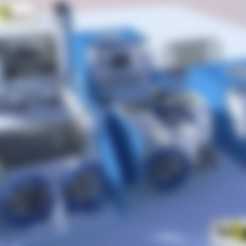 I have created a model of the OpenROV (openrov.com) in Google Sketchup. I did this in response to one of the original designers asking me if I could sketch up a drawing of how I envisioned attaching some auxiliary thrusters I proposed attaching to the ROV. I know he didn't mean use "Google Sketchup (tm)" to do it, but since I have experience with that program and I find it useful to have a virtual model to test concepts I went ahead and modeled one up the best I could.

I created the model because I don't actually have the physical ROV in my possession at this point. I'm a Kickstarter backer with a pre-assembled ROV coming my way though :) Until November 2012 when the ROVs are to ship out, I have to make do. Answering questions about physical designs is difficult without having something tangible to work with. By creating a scale 3D model I was able to see and verify if my proposed solutions could actually work.

It's not a 100% perfect to scale model, more like 99%. The laser cutting files that I could find online for the OpenROV could not import directly into Google Sketchup so I had to compromise by tracing the part outlines instead from within Sketchup. Tracing will never be exact as a direct import so that is why I say it is not a perfect model. Also, when it comes to the electronics bracket within the tube there aren't any detailed instructions on how to construct it so I just took my best stab at it.

After tracing all the parts I extruded them to give them thickness. Once all the parts were laid out I watched and viewed every video and picture I could find related to the design and construction of the ROV. That gave me enough visuals to go off to put the all the pieces together and build up the model virtually.

Notes:
This model is a work in progress, as I learn more about how the OpenROV is designed I will update it. Like I said, I do not have one in my possession so Iâ€™ve had to use creative liberty where necessary.
This model is not 100% complete or accurate; do not use it to laser cut parts.
This model was created using the free version of Google Sketchup, 8.0.14346
The renders were done using the free version of Twilight Render, a plugin renderer for Google Sketchup
This model took me about 12 hours to work on and complete
The camera motion in the videos is controlled in real-time by me using a Space Navigator 3D mouse by 3dconnexion. It allows you to pan, zoom, and rotate as if you were holding the model in your hand.

Print out the puzzle and put it together :)

I actually haven't printed it out because the Makerbot has too small of a print area for some of the larger pieces. If I scale it down to print the largest piece then the smaller pieces become too small and unprintable. The OpenROV project calls for the parts to be laser cut anyway.

In theory though if you had a large enough printer you could print out each individual piece and have a pretty complete model.