Veiled Woman at The Louvre, Paris 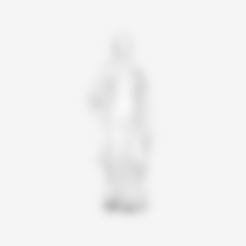 Antonio Corradini (19 October 1688, Venice – 12 August 1752, Naples) was aVenetian Rococo sculptor. Corradini was born in Venice and worked mainly in theVeneto, but also completed commissions for work outside Venice, including Viennaor Naples, where he died.

Corradini's commissions for the next several years came from patrons all over Eastern Europe. In 1716-17, he completed eighteen busts and two statues for the summer garden of the Russian czar Peter the Great in St. Petersburg, and the first of his famous veiled women; he would complete two more in the city in 1722.

In Rome, he devoted himself to sculpting a Veiled Vestal, achieved without a commission from any patron (it remained unsold), and was involved in the problem of the restoration of the dome of St. Peter's Basilica. Corradini designed eight models of colossal statues with which it was proposed to place at the foot of the drum of the dome make it more resistant to centrifugal force. He also sculpted a bust of Pope Benedict XIV and other minor works.