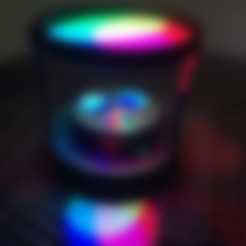 Colors collide in this fabulous device. Was it made by aliens? Is it a mechanism for sending kaleidoscopic messages to motley colored extraterrestrials?

Build one and you'll find out!

Video of thing in action: https://youtu.be/7xYOKNmgrpg

This project involves soldering, small-parts, electrical components and an extremely bright LED. You assume all risks and liabilities should you wish to undertake it.

The lamp consists of several parts that snap together. You will need one base, three pillars, a top ring, and a cover.

I have also included an EXPERIMENTAL projection disc. The Rainbow Apparatus arose from the idea that you could paint a picture using light rather than pigments. My original concept called for projection discs that could be loaded on the platform of the Rainbow Apparatus. This idea proved far too ambitious for my 3D printer and my attempt at a color logo led to a jumbled mess. I do not recommend you print the projection disc unless you have access to a very high accuracy printer.

I used three 20mm high-power LED stars for my build. I chose red, green and royal blue LEDs because these are primary additive colors. When their lights mix you can get four additional colors (cyan, yellow, magenta and white)

A pack of ten LEDs of each color costs less than $5 on eBay. The LEDs are rated at up to 3W. I strung all LEDs together in series and am driving them at about 9V.

Be careful not to look directly at the LED. It is extremely bright and could damage your eyes.

A string of LEDs in series will begin running at about 8V-9V, so you will need a suitable power supply. I used a bench-top adjustable power supply for testing, but in my final build I used a recycled 12V wall wart combined with a adjustable micro DC-DC step-down converter from e-bay. The particular one I used was listed as "10pcs Mini DC-DC Converter Step Down Module Adjustable Output 1-17V for RC PLANE" and sold by axeprice. It was small enough to fit in the base of the lamp, but you could also mount a larger module outside of the lamp. The converter has an adjustable output voltage, so you can tune the brightness of the LEDs and balance it against heat output.

Because in my build I did not use resistors, picking the correct voltage for the LEDs is very critical. The LED string will begin conducting at a certain voltage, but beyond that, the current will increase very sharply. The sweet spot is only a few tenths of a volt beyond the initial conduction point. I recommend using a bench-top power supply with a variable voltage knob and an integrated ammeter to determine the voltage that causes enough current to run through the LED without overheating (about 0.4A for a 3W LED). Once you have determined the correct voltage, re-check it using a multimeter and write it down. You will use this voltage to tune the DC-to-DC converter during assembly.

You want the LEDs to run warm, but not hot enough to melt the plastic or cause a fire hazard. Do not run the lamp unattended until you have monitored it for several hours to make sure heat is not a problem.

This design is fully customizable. Be sure to check it out in the Makerbot customizer!