The Illumination of Pi 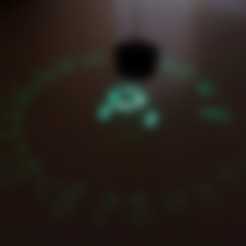 This light sculpture illuminates pi, a number that has brought enlightenment to students and scholars of math and science throughout the ages.

A mathematical technique warps the cutouts on the curved sides of the cylinder such that an unwarped shadow is cast on the floor. The digits of pi swirl along the arm of an Archimedes spiral; the length of the sequence before it fades a measure of your printer's ability to capture fine details.

This project involves soldering, small-parts, electrical components and an extremely bright LED. You assume all risks and liabilities should you wish to undertake it.

The lamp consists of two parts, a base and a lid. The cutouts on the base are larger towards the bottom of the lamp and get smaller further up. Because of this, you should get a good print regardless of the resolution of your printer -- a high resolution print will extend length of the sequence that is legible, but is not necessary.

I made my print on a consumer FDM printer at 0.16mm layer height and retraction enabled

I used a 20mm high-power green LED star for my build. A pack of ten costs about $5 on eBay. The LED is rated at up to 3W. I've found running it at around half that seems to give good results without overheating and without needing a heat sink.

Be careful not to look directly at the LED. It is extremely bright and could damage your eyes.

A green high-power LED star will run off 2.2-3.4V, so you will need a suitable power supply. I used a bench-top adjustable power supply for testing, but in my final build I used a recycled 12V wall wart combined with a adjustable micro DC-DC step-down converter from e-bay. The particular one I used was listed as "10pcs Mini DC-DC Converter Step Down Module Adjustable Output 1-17V for RC PLANE" and sold by axeprice. It was small enough to fit inside the lamp, but you could also mount a larger module outside of the lamp. The converter has an adjustable output voltage, so you can tune the brightness of the LED and balance it against heat output.

You could also get fairly good results with a two AA batteries and maybe some resistors, but it would not run as long.

Because in my build I did not use resistors, picking the correct voltage for the LED is very critical. The LED will begin conducting at a certain voltage, but beyond that, the current will increase very sharply. The sweet spot is only a few tenths of a volt beyond the initial conduction point. I recommend using a bench-top power supply with a variable voltage knob and an integrated ammeter to determine the voltage that causes enough current to run through the LED without overheating (about 0.4A for a 3W LED). Once you have determined the correct voltage, re-check it using a multimeter and write it down. You will use this voltage to tune the DC-to-DC converter during assembly.

You want the LED to run warm, but not hot enough to melt the plastic or cause a fire hazard. Do not run the lamp unattended until you have monitored it for several hours to make sure heat is not a problem.

This design is fully customizable. Be sure to check it out in the Makerbot customizer!