The Genius of Hunting at The Louvre, Paris 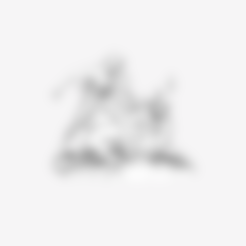 The Genius of Hunting is a large bronze sculpture by Jean-Baptiste de Bay (Nantes, 1802 - Paris, 1862). The plaster version of the sculpture was presented to the Salon in 1836 after its completion and was afterwards placed in the Jardin du Luxembourg. It was then placed in the main sculpture gallery at The Louvre in paris, restored by the Pari Mutuel Urbain society. The piece is also named the Lallali du Cerf, based on the painting by Gustave Courbet of the same name (The Kill of Deer) painted in 1867 and on display at the Musée d'Orsay in Paris. The scene shows a deer attacked by a pack of hunting dogs and collapsed on the snowy ground. Two characters are on the right. The drill is Cusenier Jules, a resident of Ornans while the man on horseback is Felix Gaudy, ofVuillafans. L'Hallali is in the tradition of representation of the scene hunt, from the seventeenth century. Courbet uses a harsh realistic representation closer to Flemish models. Hunting scenes are common in the paintings of Courbet; every step of the chase is represented.