Statue of a Woman "Petite Herculanaise" at The Louvre, Paris 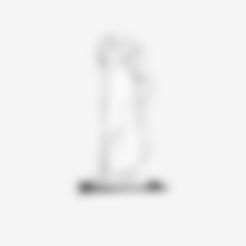 The small and large 'Herculanaises' are two statues discovered in Herculaneum considered to be reproductions of two original sculptures created at the end of the 9th Century BC. The style of the two draped women derives from the greek sculptor and artist Praxilites. This model is uncertain in who it is depicting though it has been argued from their forms and drapery that it could be either Demeter or Coré; historians found this information just from the feet of the models!