Ptolemy of Mauretania at The Louvre, Paris 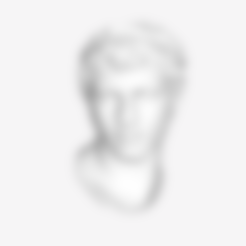 Ptolemy of Mauretania (13 BC/9 BC-40) was the last Roman client king and ruler of Mauretania for Rome. This marble sculpture by an unknown artist was carved between 30-40 BC AD depicting the King. The vigorous image executed in the time of Tiberus (14-17 AD) or Caligula (37-41 AD) is an example of the realistic, animated style which can be found in North Africa during the Hellenistic period of Egypt. The style is in a similar to style to the representations of the Roman Imperial period.