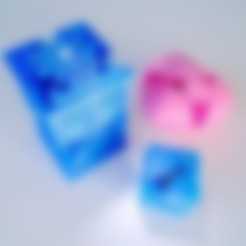 This is my new OpenSCAD PLA gear kit. The pin connectors are specially designed to work with PLA - so they are flexible and don't crack when inserted. The idea of this kit is that the gear centre and pins remain the same, its only the outer shells that change. This makes individual gear plates interchangeable, which should simplify the creation of all sorts of gear object mashups. Have fun!

UPDATE Aug, 31 2013 Having problems with loose pins with some PLA colors? I have added some slightly thinker pin plates to solve this problem one has 0.2mm thicker diameter, the other 0.4mm.

The main variable you need to change is object_file in the SCAD source file. This changes the STL source used to create the outer shell. The outer shell stl object should be around 50mm square, however you can use the object_scale variable to make adjustments as need be. Uncomment individual module calls up at the top of the file to check the behaviour. Once the stl object scale and position are correct, use make all on the command line to batch build all the plates in one go. The makefile is set up for OpenSCAD on the mac. If you are running windows, change the SCAD variable in the Makefile to the appropriate path.

###NOTE: OpenSCAD is pretty fussy about the STL objects it will accept, they need to be centred on the origin (0,0,0) and well formed.