Nisus and Euryalus at The Louvre, Paris 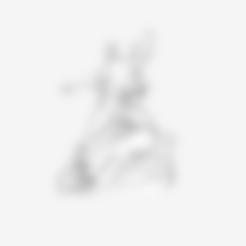 Nisus and Euryalus are a pair of friends serving under Aeneas in the Aeneid, the Augustan epic by Virgil. Their foray among the enemy, narrated in Book 9, demonstrates their stealth and prowess as warriors, but ends as a tragedy: the loot Euryalus acquires (a glistening Rutulian helmet) attracts attention, and the two die together. Virgil presents their deaths as a loss of admirable loyalty and valor. They also appear in Book 5, during the funeral games of Anchises, where Virgil takes note of their amor pius, a love that exhibits the pietas that is Aeneas's own distinguishing virtue.

Nisus and Euryalus are among the refugees who in the aftermath of the Trojan War flee under the leadership of Aeneas, the highest-ranking Trojan to survive. Nisus was the son of Hyrtacus, and was known for his hunting. The family cultivated the huntress-goddess who inhabited Mount Ida. Euryalus, who was younger, has spent his entire life in a state of war and displacement. He was trained as a fighter by his battle-hardened father, Opheltes, of whom he speaks with pride. Opheltes seems to have died at Troy.

After their wanderings around the Mediterranean, the Trojans are fated to land on the shores of Italy. Some members of their party, especially the matres ("mothers"), are settled at Sicily before the Italian war, but the mother of Euryalus refused to be parted from her son and continued on.