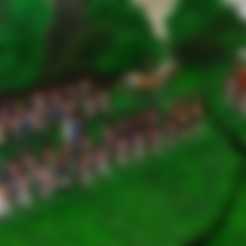 They say you should never go back to an old project, but that's just what I did...
This is a re-vamp/update of my Napoleonics - Part 1 - French Infantry/allies (https://www.thingiverse.com/thing:2786275) , and has a number of changes.
In the colour piccy the Mk IIIs are at the front with the Mk Is behind them for comparison purposes.( Napoleon and the Old Guard grenadiers are elsewhere in this series) :-

If you think you hadn't seen any Mark IIs, don't worry - they didn't really exist - they were effectively Mark IIIs with two figs to a base before I decided to base them individually, so the Mk IIs only exist on my hard disk

I'll be changing the other nationalities in due course - painting the Austrians at the mo..

As usual please excuse my crummy painting which is down to old age and wobbly hands!