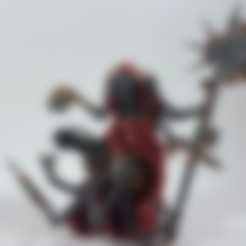 After centuries of chipping away his flesh bit by bit and obliterating countless obstacles in his quest for knowledge, little remains what may remind one that this creature clothed in frayed robes was once human. But by now, countless cybernetic enhancements and the necessities of war have forged its appearance into one more terryfying than even some of the enemies that plague the Imperium and its worlds. But it matters not, for neither the fearful glances of the citizens, the ragged state of his clothes or the slow decay of the vat-grown flesh on his replacable biological components are more than passing annoyances to him, while his true desires are known only to himself. To unearth priceless relics from a Dark Age? To protect the forges of Mars and their allies from hostile invaders? Or something else entirely? In fact, who can even say for certain, if this biomechanical creature is still a loyal servant of Mars, or has long since fallen to the Dark Gods and their promises of Innovation and unholy Knowledge?

So, this was a lot of fun to make, although I have yet to figure out how to print such a monstrosity of fragile mechanical tentacles and countless tiny lenses. For the design, I took inspiraton from the Techpriest in the "Death of Hope"-Trailer 2 and 3D models from more things than I can count. If I forgot to mark them properly, please contact me so I can correct this oversight.